Trials and Tribulations of the Writing Life

I have been watching with some resentment, not to say a gimlet eye, a book (one of three in a series) that I wrote in 2002 as “work for hire” (for a flat fee, no royalties) perform rather well on Amazon. The title is Garden Psalms and it has been out of print for some years. It is a full color beautifully illustrated “devotional” with a ribbon marker, and it did well in stores for Honor Books when it was published. But Honor has been bought and sold several times since then and I don’t know who has the publishing rights (or I’d try to buy them).

Currently it is selling on the used book market for as little as a penny to as much as $25 in some cases and has received rave reviews. This is an old “gifty” book, but very beautiful and comforting to read, which accounts for its continuing popularity. 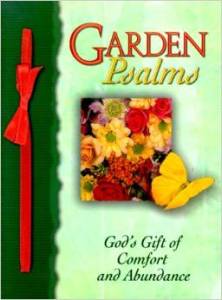 Every penny the re-sellers make from the book goes straight to their pockets.

My distress and frustration over this is just another instance of a writer doing what she has to do to make ends meet early in her career. No, I wasn’t offered any royalties, but it was a nice chunk of change when I needed it and I took the work gratefully. What galls me today is that I was a nobody when I wrote it, but since then have built a writing career and small reputation, and so now the re-sellers are capitalizing on it, for what it’s worth, and using my name with the book. Ironically, the original publishers did not want to use my name with it at all!

If there is a moral to this story, a lesson to be learned, it’s to avoid “work for hire agreements” like the plague. Always try to wheedle some small royalty out of the publisher in any agreement and guard your publishing rights like gold. Books have very long lives and you never know when there will be a resurgence in value in any given book.

My only recourse today would be to purchase the rights from the current rights holder, but he/she has disappeared and the book is still out of print!

Perhaps I shouldn’t be resentful of this, but my name is in headlights over it as author, making hay of the fact that since I wrote that particular book, I went on to write and publish several more, some very well reviewed.

That’s life, I guess, though I still will keep an eye out for the current rights holder to my “psalms” books written so long ago 🙂 I’d love to reissue them in updated versions with new covers.

A lifelong critical reader with literary tastes, a novelist, short story writer, essayist, book critic, and professional book editor for many years. A consultant to publishers and authors, providing manuscript critiques and a full range of editorial services. A friend and supporter of all other readers and writers. A collector of signed modern first editions. Animal lover and tree hugger. Follow me on Twitter @LangstaffEditor
View all posts by Margaret Jean Langstaff →
This entry was posted in publishing, writing and tagged Gardn Psalms, Margaret Langstaff. Bookmark the permalink.

4 Responses to Trials and Tribulations of the Writing Life

Holding the Planet to Reason, not Ransom

The poetry of ineptitude.

A Collection of Concert Ticket Stubs

notes from the spider farm

MAKING A DIFFERENCE, ONE STEP AT A TIME

Faith, friendship, and love conquer all. Unless. Lets not forget how messy the world is.

"Lock up your libraries if you like; but there is no gate, no lock, no bolt that you can set upon the freedom of my mind." - Virginia Woolf

Life is full of experiences. We either get blessings or lessons. Follow your dreams passionately. Stay happy and cheerful. Be an inspiration to everyone you meet.

Examination of the makeup of the human ego and its predictable results.

Fumbling by Leisure, Singing to Cake